There are episodes in the Doctor Whoniverse called “Doctor Lite.” They’re episodes that feature little to no Doctor as the protagonist and/or are only tangentially related to the Doctor. 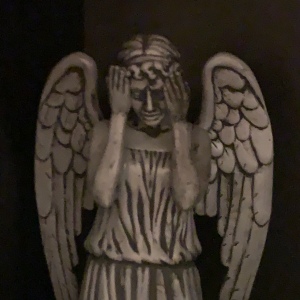 Some of the most famous are Blink, which is the first weeping angels episode and my favorite, but much reviled, Love and Monsters. There are plenty more, especially in the RTD show runner era. However, these types of episodes existed in the classic era as well. Mission to the Unknown is a lost episode in the classic era that has no Doctor at all.

That is what my day has been: Doctor-Lite. I did muse on Twitter about how fun it would be to have a Doctor Who LEGO Advent calendar (I mean think about it, 56 years to pull build ideas from.) I also pulled out my Thirteenth Doctor wallet purse when I went to pay for my daughter’s haircut. I also found and began putting together a micro LEGO TARDIS is had found from my son’s Dimensions set… but then gave up when I could not find the fourth side. That is the extent of my daily Doctor Who, today.

We all have those days. Days when what we love only barely touches our lives. However, during this holiday season, let’s make sure that what we love and what we only ley barely touch our lives isn’t the people in it. Let’s make sure we are carving out time for them: be it with religious celebrations like Advent, secular time such as dinner around the table, or sending a text, making a call, sending and thought or a prayer. Make sure we are making this month not Fam-Lite… even if it is sometimes Doctor-Lite.